Trail Stories #4. The desert southwest of the USA, “red rock country”. Mrs. Dean and I are navigating from cairn to cairn on a short loop trail, starting and ending at a parking area. We espy a pair of what we correctly guess to be lost retirees, us in a few decades perhaps, driving an RV around the continent and going on any little day hike that appeals to us. Now that I think of it, this was before we were married, she wasn’t “Mrs.” yet; must have been sometime in the late 80’s or early 90’s. She had driven from Seattle to Arizona with her sister to meet up with their parents for a family vacation, and they had all ended up in Phoenix, where I flew down to meet them, the parents for the first time. Parents and sister would be flying back to Mid-Atlantic; we would be driving back to Seattle, a nice little vacation for me, a continuation of a long one for her.

Our retirees are evidently waiting at the next cairn, which our last one had pointed to. They’ve made it this far so they know how to navigate, but as we chat, we learn that they can’t see the next one, or even the previous one. They have been waiting for a while, hoping somebody like us will come along. I got the feeling they were ashamed that they hadn’t brought water with them. We let them have most of ours, but they aren’t inclined to hike with us, so we eventually set forth to the next cairn, hoping they’re watching where we go, and eventually complete the loop.

I’ve read Desert Solitaire and The Monkey Wrench Gang, and web-stalked Edward Abbey somewhat. Years after the retiree incident, Mrs. Dean and I took what ended up being a very amusing vacation (not only the vacation itself, but also the aftermath when I got back to work afterwards – a set piece/object lesson for the software business that I might relate someday) to Santa Fe. I always fall in love with the geography and ecology of wherever I visit, and fantasize about moving there, but of course practicalities always intrude upon such ruminations. Really, there are too many people in Redrock already. My environmental footprint would go up so much I just can’t justify it. Talk about being ashamed. Plus, it would probably never feel like home. Home, to me, from the geography/ecology perspective, involves Sitka Spruce and Western Redcedar. Douglas Fir and Deer Fern. Otters, Beaver, Orca, Copper River King Salmon.

If I were going to live remote from all urbanity, in a Pacific Northwest temperate rainforest, I’m thinking Skidegate, on Graham Island in British Columbia. Very low population density, devoted to outdoors experiences. A ferry terminal connecting to Prince Rupert. I’ve never been there, but from what I’ve read, Haida Gwaii, the name for Skidegate’s archipelago, would be a lovely place to visit. I’m sure I would fall in love with it and fantasize about moving there, and in many ways, it would feel like home. I don’t know if it’s even possible. Sure, a multi-week or -month excursion would be totally doable, but long-term what’s the visa situation, how could I get Canadian residence, do the Haida even rent or sell real estate to non-Haida? I haven’t looked into any of that. A coffeeshop with wifi, the availability of craft beers, and unlimited hiking along wild coastlines amidst my favorite gymnosperms and sporophytes. An indigenous art style that I love. But the winter weather, winter darkness, lonesomeness. I’m not sure I could stand that. 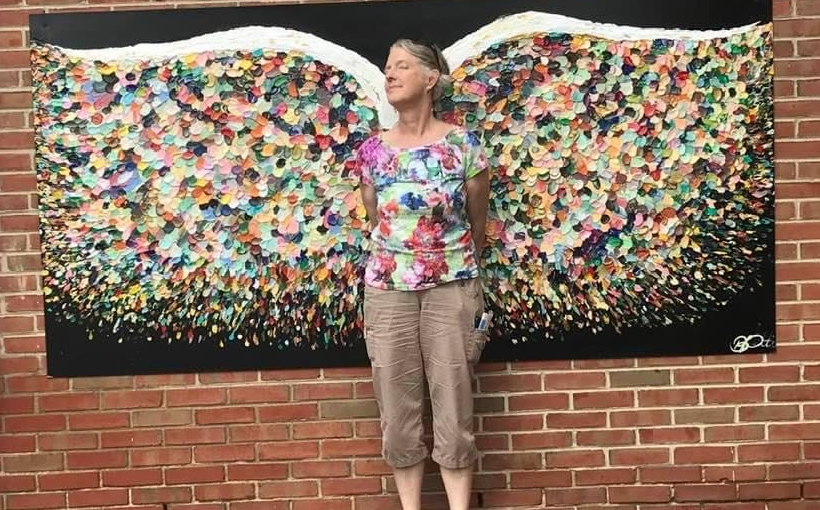 My wife, Barbara, died of metastatic breast cancer on August 23rd, 2021. We got married in 1995, right after I’d been hired full-time at The Great Satan, to get her onto my health insurance as soon as possible, as she had just been diagnosed, with the ceremonial wedding coming a year later. We’d been seeing each other since the late 1980s, having been introduced by one of her Glacier friends. She got into a great clinical trial, but in 2019 her lymph nodes started acting up again, while I was in Germany on my first (3-month) Visiting Scientist gig. The void left by her absence is so palpable I feel that I know metaphorically some of what an amputee feels. Fortunately, most of my friends and family know that I am an introvert and touch averse, and so do not overdo “supporting” me. Here are some anecdotes.

“Is that Mrs. Dean you’re talkin’ to?” asked Ross, late one sunny warm highish-latitude German summer evening at his (Lynch’s) Irish Pub. Since Mrs. Dean and I had regularly patronized the place during the prior year’s warm (and even cooler) months, she and Ross were well-acquainted. But Mrs. Dean was back in Baltimore; Ross’s query arrived during our daily Phone Time, late for me but comfortable for her. As usual, I was sitting at one of his patio’s RUGPB tables (Rickety Ubiquitous German Pub Bench) with my doodlebook and a Kilkenny pint. I had given Ross the nod a few minutes previous, and as the goodbyes approached, he arrived with another one and his cheerily lilting question. A natural publican, Ross is an overgrown leprechaun, speaking both German and English with an adorable Irish accent. Barbara, overhearing him, was instantly fond of her new nickname.

“There is no landscape that cannot be improved by the presence of a horse”. A colleague quoted that to me once during a pause in a bike ride through German farmland, as we enjoyed the view of some horses in a landscape. That night, I began reciting this quote to Barbara during our Phone Time, but she interrupted, completing it. I haven’t been able to identify the source of the quote, but perhaps it is an Obvious Truth known to Horse People, who simply generate it automatically. Icelandic ponies had set the tone for our (geez, two decades ago!) barge/bicycle tour of the Netherlands, as our very first overnight stop on the barge Noorderzon (schipper Bart Wijn) was adjacent to a field of them. Horse-drawn carriage rides. Horse shows. Horse art prints, horse postcards, horse sculptures. Dick Francis novels. Several thousand dollars for a charming gicleé horse painting from a gallery in Coeur D’Alene. I myself am not especially interested in horses, but if I don’t mind hot salt water cluttering up my vision while I bark out helpless sobs, all I need to do is to espy or picture a horse, and think of her love for them.

Daisy, the Original Mountain Poodle, was a Barbara project when we lived in our tiny Seattle cottage. Toby Brownie Sunflower Noodle Poodle came next, from Virginia, after Daisy died and there was an earthquake as the gods evidently objected. Both miniatures, both nicknamed “Noodlius” or “Poodlius” or “Pood”. I would never have gotten a dog on my own, being lazy and irresponsible, but was of course smitten. Some of our friends became Dog People in honor of Daisy. We, and especially Barbara, indulged them greatly (and of course I continue to indulge Toby), not by giving them treats (note: there was and is no treat shortage) but by sharing experiences. Daisy hiked everywhere she was allowed (and probably sometimes where she wasn’t), and loved learning tricks. “Go around!”. “Find it!”. “Hop on pop!”. Toby, another doughty hiker, is more focused on snuggling, snuffling and sneaking, but never hesitates in the plunging ahead department. I am so proud of her. She can learn tricks, but thinks it’s kind of stupid. She may be immortalized throughout Japan, after several days hiking in the Swiss Alps beset by gaggles of squee Japanese tourist girls begging to take selfies with her. If horses or visions of horses cannot be conjured, I can ask Toby, stretched out on my beer belly for a Daddy Scratch, if she knows how much we love her, if I’m happy staining my shoulders and pillows with chlorine bleach coming out of my eyes.

If, as often happened, she and I were driving country roads and came upon a field of Belted Galloways, we’d stop by the fence and encourage the cows to join us for a scratch on the nose and a chew of the greener grass. The Dipper (Water Ouzel or Bul-bul) was “our bird”; we saw them nearly everywhere we hiked, perhaps through witting confirmation bias. Spring lambs provoked especial exclamations. If you need to get some soldering done, just follow me around and wait until a beautiful or lovely cute or darling beastie appears, then jam your goddamned wires into the corners of my fucking smelter sockets.

One story that didn’t make it into Jacques’ obituary was from Barbara’s youth (she may not have quite been in high school). After some family shopping she found a quarter in the parking lot, and took it back to turn it in to their lost-and-found. This is the way she was about everything. She never turned down an opportunity to go hiking or dining with friends, or to a concert, or just hang out, and in fact was probably herself responsible for instigating most of those opportunities. She packed as many people as possible, and sometimes more, into any event, lest anybody feel left out. She had some superstitions, such as never leaving a house save by the door you came in by, knocking on wood, saying “bunnies” three times on the first day of the month. Our deck was party central during the warm parts of the year and occasionally the cold. I am nowhere near as gregarious and so suspect that I will simply decay into a lonely old guy with no friends. Boiling lava scars my cheeks and gouges tunnels in my heart: thank goodness this post was written on computer; zero tons of paper were stained, dissolved, or torched during the months it has taken to compose it.

Vacuity: “it is a thing that happened”. There is no afterlife, except for the fact that none of us is only ourselves – we’re partly our reflection in the minds of others, who comprise our extended nervous system. That spark inside her cranium, the part that mattered most, is gone for good; the only resurrection possible is the wholly inadequate spark of memory inside those crania that remain and recall. Friends and friends and friends and family. The Glacier friends, the Ivar’s friends, the Genesis friends. Joellenbecks, Abeles, Holtgrewes, Scholls, Calahans, the Baloneys. Dapper horses, dashing dogs, curious cows, frolicking lambs. We who experience or remember these and millions of other sights and times, briefly flick a flame of Barbara’s essence, a glow that before would have reverberated with her, enlarging herself and us. Mere embers now reflect but briefly in mirrored rooms. To barge laughing through prickly brambles or nimbly hop from rock to flooded rock, is to summon her enjoyment of every moment. The night that Pavarotti died we happened to be driving through the Redwoods. The local classical stations were playing endless foot stompers, and we sang along with his Nessun Dorma, his Funiculí Funiculá, his La donna é mobile. Even though we had never even seen him live, somehow we were recapitulating his spirit. Whenever you gather, drive, hike, listen, I enjoin you to sing, to laugh, to love, to think of Barbara, and make her so.